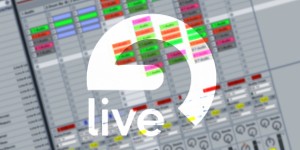 Ableton Live is a music production and performance sequencer and DAW (Digital Audio Workstation). You may be familiar with DAWs such as Cubase, Pro Tools and Logic, and Ableton performs many, if not all of the tasks these pieces of software can. Ableton Live however is also designed to be used as a loop based live performance instrument.

Ableton splits it’s two personalties using “views“, with the traditional linear sequencer called the “arrangement view” and the loop based performance view called the “Session view“. The arrangement view doesn’t need too much of an introduction for those already using DAWs. It contains a horizontal timeline onto which you can record audio and MIDI information. In-line channel controls are located on the right of the screen. When a channel, audio file or MIDI file is selected, the corresponding instrument, effects or files are shown in the bottom “detail” area. Press record and away you go.

Switch between the 2 views quickly using the top right buttons:

The session view is probably a new concept for many primarily using Cubase or Logic. For those using Reason it might be more familiar. At first glance, the session view looks very much like a standard mixer. I contains vertical channel strips with the normal volume, pan and I/O controls and the top half of each strip looks like where you’d put plug in effects and instruments. However, this upper section of each channel is actually where your audio and MIDI files or “clips” are placed, these are called “clip slots“.

Clips are the meat of Ableton, they are how the Session view functions as a performance instrument. Each clip can be either an Audio or MIDI file (depending on the channel created), and each one can be set to Loop its content, or perform other more complex actions. So really, you can think of Clips as Loops or samples. Although that doesn’t cover their full potential, its a good place to start.

The session view lets you group, control and trigger each clip. When a clip is dragged into a clip slot, a play button is shown next to it, and upon highlight it, details of the clip are visible in the detail area (bottom of the screen). If its an audio file, you’ll see the waveform along with some option to control the sample. These include non destructive and real-time pitch, time stretch, reverse, loop and clip length controls. If it’s a MIDI track, you can see a matrix style MIDI editor, and similar controls on the left. More options are available here by clicking the L and E circular buttons in the clip menu, but we’ll leave those for now.

On the far right of the screen is the “Master” channel. You cannot place clips here, but you will notice each slot is taken up with a play button and a number. These refer to each “scene“.

A scene is a horizontal row of clips as illustrated below:

Hitting the play button next to the 1 in the master channel will trigger all clips in that row to play at once. If you add clips to more row, you are creating more scenes.

At a basic level then, you could think of each scene as a section of a song, scene 1 could be an intro, scene 2 a verse and scene 3 a chorus. If the clips in that scene are set to loop, each section will play for as long as you like.

As each clip also has it’s own play button, each clip can be triggered individually. So you can build up playing loops and stopping them (Hit the square at the bottom of the channel, or any empty slot on that channel to stop a clip). So each clip can be as long as you like, be triggered at any point, looped or not, I hope the power of this view is starting to sink in.

You may have seen MIDI control surfaces like the Novation Launchpad. On that particular controller, each square button can represent a clip. So with this you have instant access to every clip you drag into the view, triggering them with the touch of a button. You can also control other functions like the mixer. With further controls like rotary knobs, faders, keyboards and drum pads, it’s obvious why Ableton has become the preferred choice for so many live electronic musicians. Go and play with it

So we’ve covered some basics here, probably enough to get you started. Remember that there is so much more to this software. The best way to learn is by doing, so load it up now and try jamming with clips. Keep an eye on our the site for lots more in depth and useful Ableton Tutorials.